On visibility from major thoroughfares, the only site that received a failing grade was the one at Highway 3 and County Road 8.  Six sites, including the GM site, scored just 50%.

​Admittedly this was a criterion that didn't carry a high weighting, since the maximum score was 20 points.  More heavily weighted, with a maximum score of 40 points, was Arterial/Collector Road Access.   But if we put them together, we're looking at a hefty maximum potential of 60 points, which is not unreasonable given how important access is to everybody.

​On Visibililty, the County Road 42 site shared the top score with four others, beating out the GEM site by 10 percentage points.

On Access, the County Road 42 site shared the top score with two others, but again beat out the GEM site by 10 percentage points.

The assessment definition on Visibility specifies that:
​
The Facility must have good visibility from major thoroughfares.

Regarding Arterial/collector road access, the assessment definition specifies that:

The Facility should be located with close access to major transportation corridors within the tributary region.  Typically, most hospitals have an address on an arterial road or equivalent.  They also should have close access to major roadways for connectivity to Regional communities.
The scoring factors give some insight into what is meant by "major thoroughfares":  it refers to the "potential for a significant portion of the main hospital building to be visible from highway"

As for Arterial/Collector road access, the scoring refers to "consideration of direct potential or established access to an existing highway":

100%:  less than 1/2 km from arterial/collector
​70%:  1/2 to 1km from arterial/collector
The County Road 42 site, tucked away behind the Windsor Airport land, with a major solar farm just starting to be built between E.C. Row and County Road 42, was therefore considered to have something between good and excellent potential for visibility from the highway, and less than 1/2 km actual distance from an arterial or collector road.

County Road 42 is "only" a two lane road.  Is it considered to be a major thoroughfare?  It's certainly used as a major thoroughfare by the regional communities referred to in the assessment definition, though Windsor residents are significantly more likely to use E.C. Row.

It's not entirely clear what is meant by "highway", but it's not unreasonable to assume it's E.C. Row, because both the GM site and the GEM site have direct access points on major thoroughfares (Walker, for the GM site, and Tecumseh for the GEM site).

It's also not entirely clear how one differentiates for potential visibility​ given our flat landscape and relatively low rise development pattern, so let's look at the physical distance from the closest E.C. Row exit to each of the proposed sites.

​To the GM Site, it's an easy 3.2 km distance.  To the GEM site, it's slightly shorter, at exactly 3 km.
From EC Row to the County Road 42 location, we're looking at a 4.2 km trip, which by car, should take 4 minutes.  This is the same amount of time it is expected to take to drive to the GEM site, and one minute less than to the GM site. 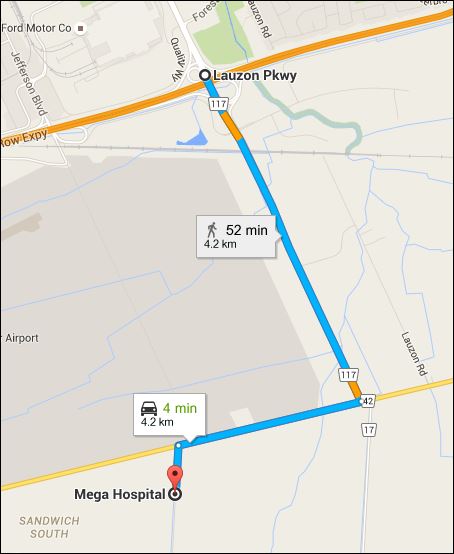 It's hard to understand why the site that's physically further way from EC Row, scored highest on both of these criteria.

It's also hard to understand the thought process of residents east of Windsor who are enthusiastic supporters of the proposed County Road 42 site, but who are vehement opponents of the GEM site on the basis of accessibility.

Of course, something else to think about, perhaps more philosophically, is why highway access is so important to the scoring methodology.  Since this is a long term project, should the criteria not have considered how many different routes residents could choose to access the site, depending on where they are coming from?  Surely, from a practical point of view, the most accessible site is one that has multiple access routes?