Mr. Spencer’s letter suggests a pattern of bias and interference in the work of an independent expert in order to favour an unserviced site for the new hospital.

​Rick Spencer was the Consulting Engineer for both shortlisted hospital sites (County Road 42 and GEM)
​
Note: Alan Halberstadt wrote about this issue in his column in BizX magazine. 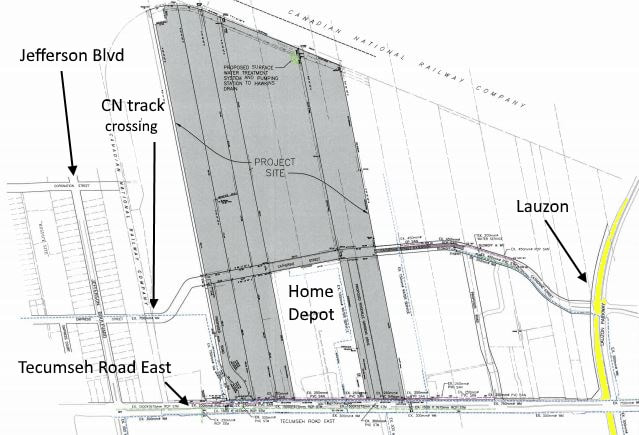 ​The calculations used to select the winning hospital site were materially different than those Mr. Spencer submitted to Stantec. This serious irregularity has not been investigated.

2.  Infrastructure deficiencies at the County Road 42 were not flagged in the site selection evaluationThe need for a new watermain and greater hydro capacity raises questions of how the County Road 42 site was able to achieve a 70% score for its servicing.

​Insufficient Hydro Capacity
The capacity of the County Road 42 site’s Hydro One feeder is insufficient to absorb the load required for a hospital. This cost of this upgrade has yet to be quantified.

​3.  Why did Stantec not liaise with Mr. Spencer as agreed?The RFP required a determination of the probable costs to bring each site to a condition "which can be readily connected to municipal services including water, sanitary and storm sewers, electrical, natural gas, and other utilities."

The price differential for these additions is $580k more for County Road 42.

​Subsequent to this determination, significant additional servicing costs favouring the County Road 42 site were added without consultation with Mr. Spencer:

Though the final price differential remained in GEM’s favour, it was more than halved, to just $213k:

Why did Stantec not liaise with Mr. Spencer before changing his cost estimates?
Stantec Consulting originally informed him they were in agreement with his work. They also indicated they would liaise with his firm in the event of any required adjustments to the cost estimates. This needs to be addressed.

Mr. Spencer alleges the access route to the GEM site was changed to Jefferson Boulevard after he submitted his calculations. This is a significant alteration.

In this way, $26.9M in unnecessary road upgrades were added to the equation. This is in comparison with $22.9M in upgrades needed for County Road 42.

The decision to use a different access route without prior liaison with the Consulting Engineer needs to be addressed.

​5.  Taxpayer-funded roadwork would cost >80% less if the GEM site was selected

​Bearing in mind that Mr. Spencer already explained why the use of Jefferson is redundant, he notes that the stretch of Jefferson Boulevard in question is much shorter than County Road 42.

Summary: Comparing the costs
​
Update: We made inquiries about the allegations above after Alan Halberstadt wrote about them in his column in BizX magazine. On February 19, 2019, Windsor Regional Hospital wrote us a response that can be read at this link.
Read Spencer's Letter