November 6, 2020 Report: Windsor's Worst Planning Mistake Ever
​May 6, 2019, The Globe & Mail: Will Windsor's new hospital heal the city or do it harm?
​​Hospitals belong where people live
In October 2018, Windsor City Council approved the development of Sandwich South, to be anchored by a $2 billion single-site acute care hospital to be built on active farmland adjacent to Windsor Airport. The plan will result in the loss of WRH’s two urban hospital campuses and the removal of over 5,000 jobs from densely populated neighbourhoods. The hospital is expected to be completed no sooner than 2027.

Windsor’s rapidly aging population, climate-related flooding, and anticipated changes to the post-Covid Ontario healthcare system ensure this plan will be remembered for generations to come as the city’s worst and most costly mistake ever. 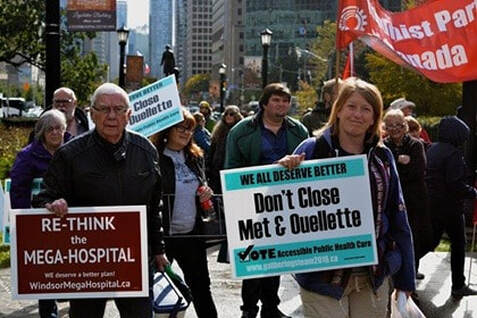 ​Thousands of residents have declared their displeasure with the anticipated closing of Windsor's urban hospitals with lawn signs: "Don't Close Met and Ouellette, We All Deserve Better!", "Re-think the Mega-Plan, It's not a Done Deal" and "Re-think the Mega-Hospital, We Deserve a Better Plan!"
​
More about the issue:
The proposed WRH mega-hospital is part of a larger development scheme: the Sandwich South Secondary Plan. The mega-hospital is to be built on what is currently active farmland adjacent to Windsor's airport. The 60-acre facility is being used to justify the residential and commercial development of a further 1,000 acres of prime agricultural land.

Yet, when you look at current statistics, the need for a new subdivision outside of the city core is not supported: the local population is aging and economic growth is stagnant. Other communities are tackling their healthcare infrastructure modernization by taking advantage of existing urban infrastructure. While the mega-plan may temporarily benefit a few developers, it will increase Windsor’s long-term residential tax burden and create barriers to healthcare for many of the city's most vulnerable people.

For five years, fact-based concerns raised by Citizens for an Accountable Mega-Hospital Planning Process, along with community groups that include the Ontario Health Coalition, and a growing number of individuals willing to speak out publicly, have been ignored.

Together, we have been pleading with local decision-makers to develop a legitimately responsible, inclusive and transparent planning process. This destructive scheme will affect the region’s health, economic and environmental well-being for generations to come.

While hospital officials encourage staff to express their support, the public is largely unaware that medical personnel are prevented from voicing negative concerns. There’s no debate about the need for updated local health care infrastructures. Residents in outlying municipalities also need and deserve accessible healthcare, though the solution does not lie in pitting county residents against city residents. There are better ways to improve Essex County residents' access to healthcare services that do not involve gutting the city core.

​CAMPP's LPAT appeal and beyond
​In October, 2019 the LPAT heard our legal challenge of Windsor City Council`s August 13, 2018 decision to greenlight the proposed mega-facility.  Twenty-eight organizations and individuals received permission to join the appeal as participants. On December 3, 2019 the LPAT Tribunal (presided over by a single adjudicator) summarily dismissed our case.

On December 18, 2019 we announced our intention to appeal the LPAT's Decision based on four key issues:
- Keeping emergency hospital services where people live
- No consultation occurred with First Nations
- Climate change was not considered
- Implausible employment growth projections were used to determine land needs

A note to health care professionals and other supporters who may need to remain anonymous: We thank those of you who have supported our efforts but could not publicly come forward. We want to assure those who will financially contribute to this important campaign, that all anonymous contributions will remain completely confidential.​ 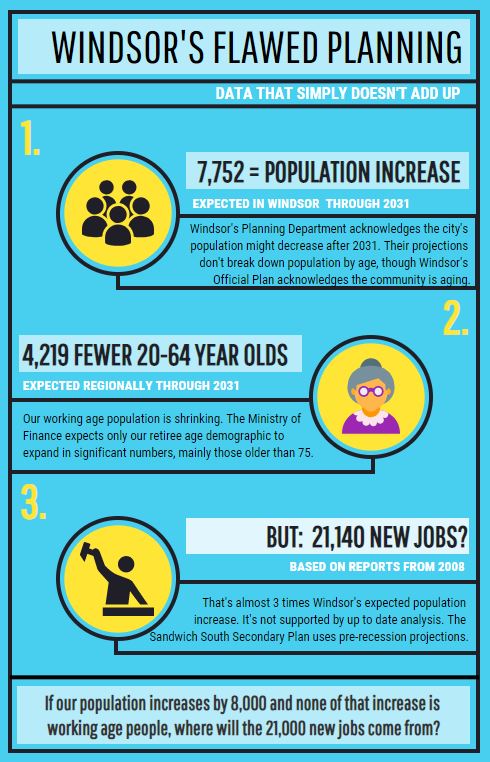