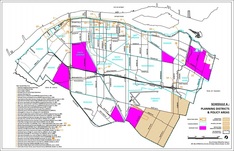 Those who had their hearts set on a new hospital at the GM site between Kildare and Walker will have been disappointed to learn that it failed dismally on Official Plan designation, scoring just 20%.

The urban GEM site at 6770 Tecumseh Road East was awarded a higher score than the greenfield County Road 42 site, though the difference was marginal.  The additional two points had an impact of 0.19% (yes, you saw it right:  that's not quite one-fifth of one percent) on the overall ranking.

It's very interesting - perhaps surprising - that the County Road 42 site scored 70%. This corresponds with a ranking of
"[Institutional use] not designated, but an amendment has a strong possibility of support."

​One wonders why the GM site scored only 20%, which corresponds with a ranking lower than "[Institutional use] not designated, but an amendment has minimal possibility of support".

​One might have expected that with an existing hospital so close by, there would be few if any impediments to maintaining a healthcare presence in the Walkerville area.  The owner of the site certainly didn't seem to think it would pose a significant problem: 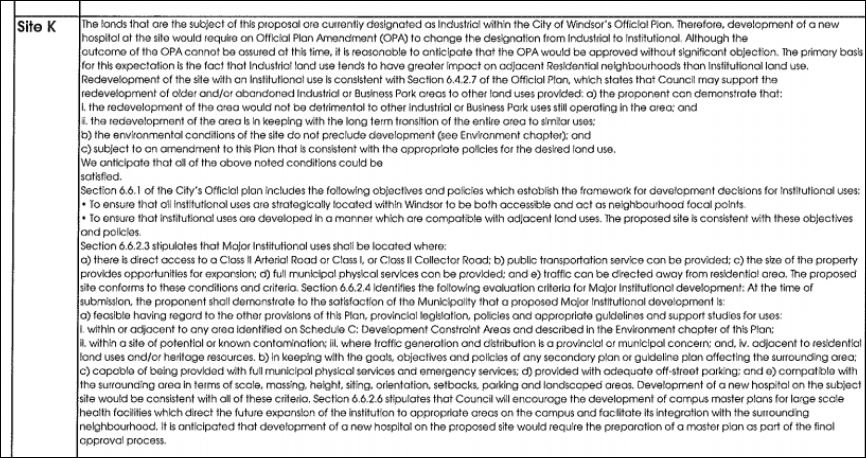 It's hard to imagine Council turning down the opportunity of $1.8 billion in provincial funding on an official plan technicality.  Of course if the site in question was of great archaeological or environmental importance, it could be problematic.

In an urban sprawl-friendly environment, the appeal of greenfield construction lies in its apparent simplicity.  In spite of language in Windsor's Urban Plan suggesting the exact opposite, this is clearly the case here.  The use of productive farmland for institutional use was perceived to be less of a hassle than conversion of a large unutilized brownfield site in Windsor's core.  ​
For those interested in more factual information on Official Plan Designation, eight of the 22 sites were given a score exceeding 50%.

The assessment definition is lengthy.  It emphasizes that:
​
... the importance of the official plan designation is whether the subject property's regulations permits a hospital ... Should the land use not be an institutional use within the official plan then an official plan amendment would be required which would result in additional time and resources.
In this map, taken from Windsor's Official Plan, the County Road 42 site is in the taupe area in the bottom right:
According to Windsor's Official Plan, "development in this area will be subject to the completion of Secondary Plans and the availability of municipal servicing and infrastructure".  It's evident that this process would incur the additional time and resources referred to in the assessment definition quoted above.

Presumably this is the reason the site at 6770 Tecumseh Road East, which falls in one of the 6 magenta Secondary Plan areas, was awarded a higher score.

But the difference only had an impact of 0.19% overall, suggesting that the time and resources to develop the secondary plan were considered to be really inconsequential when the Steering Committee established the site selection criteria.

As for why the GM site was considered to be such a poor candidate for a hospital, there is no logical explanation that we can think of.


Further reading:  The 2011 Sandwich South Secondary Plan document makes no mention of a hospital or medical offices in and around Country Road 42 and Concession 9.