What do Windsor-Essex Residents think about the Hospital Proposal? 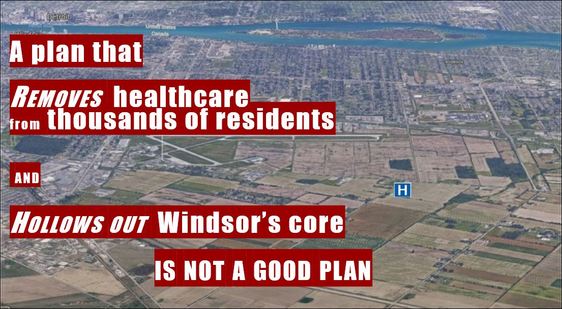 A well-chosen hospital location and its satellites will provide access to all its residents, regardless of income or where they live. Sites should also be environmentally sustainable. The proposed hospital plan does not meet these criteria.

The following is a list of individual concerns CAMPP supporters have sent in, however they are not all necessarily representative of CAMPP. CAMPP's concerns primarily relate to the proposed location and site selection.

Lack of Community Engagement:
Reduced Accessibility:
Lack of increased healthcare:
A Single Site hospital:
Reduction in Healthcare:
Environmental and health concerns:
Unnecessary land use (the 60 acre mistake):
As an economic anchor:
Costs:
Use of P3 financing:
Waste of current facilities:
Zoning and Planning:
Distance to other amenities: